In traditional Rwanda, most transportation of goods was done using the head. The basic tool, a secular sort of cushion, placed between the object and the head. Certain burdens such as bundles of grasses, firewood and tree trunks were carried directly on the head or shoulder. Baskets were often used. Their types were numerous, most common being bamboo baskets. These were filled with grain, cereal, tubers, fruit, and other things. Calabashes were used to transport beer and other liquids. Certain craftsmen had a specific way of carrying their products. An example is the typical potter’s basket, also used for carrying pots of milk; bundles which could be a dozen bamboo baskets; or even shields that were strung on sticks.
Carrying things by hand was continually practiced and characterized by many “attitudes”. Liquid contents – milk jugs, calabashes of beer – in small baskets, etc. were often carried in one hand, arms folded, shoulders high, or with two in front. In authentic tradition, one could only carry objects in baskets with handles.
Four people used two poles to support a litter on their shoulders, and this was the customary method of transporting important people and sometimes, ceremonial drums. Today the litter is used in rural areas to carry sick or dead people. To cross the lakes and large rivers, people used canoes moved using paddles. A wood and grass torch was used to transport fire and keeping it for several days. 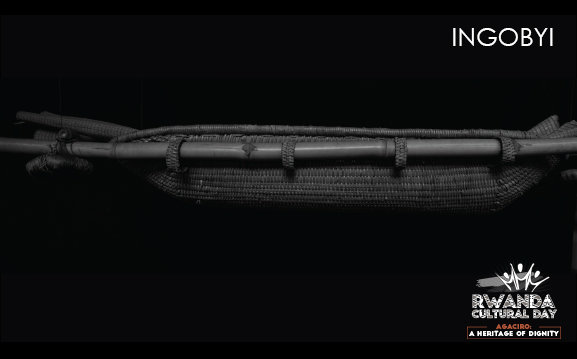